A couple of days after the start of the year 2013, I arrived at Mambo to do a research for MamboViewPoint in combination with my study. At this moment, I am a master’s student in Social & Cultural Anthropology at the Free University in Amsterdam, The Netherlands. My aim for this research was to find out more about the perceptions of the people in Mambo village towards the development projects facilitated, and how this would influence their behavior. The contribution I would make to MamboViewPoint with this research was that they could improve their communication with the villagers. My duration of stay was almost three months. If I did not had to return to finish writing a thesis, I would have definitely stayed longer at this amazing place…

The arrival
At the moment I arrived, I experienced a beautiful place in the Usambara Mountains: A stunning view over Tanzania and Kenya while I sometimes could catch a glimpse of Mount Kilimanjaro. Before this time, I have been in Tanzania three times for holidays and an internship, but that I missed this place felt as a missing for my previous trips to Tanzania.
Before I arrived at this place, I had some serious doubts about how I would experience these three months. First of all, I am really a person who loves cities and busyness around himself: My internship for my former study was mainly in Arusha. During this internship, I went for a program towards a very remote area for one week, and at the end of that week I really felt ‘homesick’ to the big city. Now I was going to stay at a remote area for three months, which is way longer than this one week during my former internship.
Another point which I was a bit worried about was my level of Kiswahili. Before arrival, I spoke a bit of Kiswahili, but this was on such a level that it was not really useful to work with. Despite of these worries, I also looked forward to this adventure: This would become a personal challenge for me, and I would try as much as possible to contribute useful anthropological knowledge to MamboViewPoint.
The worries I had at the beginning quickly disappeared after my arrival. I noticed that Mambo and MamboViewPoint is a nice place with a friendliness of people, which I did not experience that much as during my travels around the world. Herman, Marion, and the rest of the staff gave me a very warm welcome, and because of them, I knew I arrived at a good place. 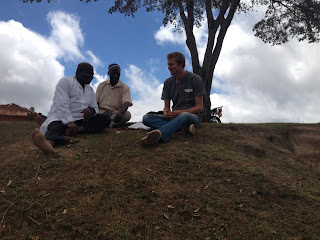 The start
Since almost one year before my departure to Tanzania, I have already started reading literature and scientific articles about this topic. At the moment I arrived, it was time to assess all this knowledge in ‘the field’. I started with just observing what was going on. Luckily for me, shortly after my arrival I was brought by one of the staff members, Kipimo, to a general village meeting. He really took care of me, and could explain me good what was going on. Together with Ndege, the local manager, I discussed in the first week how to come in contact with the people. He had some very good ideas which helped me to present myself more to the people of Mambo. Another staff member, Amiri, brought me into contact with the younger generation of the village. He is one of the members of the local football team ‘Dogodogo Stars’, and since the first week I also became a member of this football team. Also Herman and Marion helped me a lot during some brainstorms about what is going on in the area, and provided me a clear picture of Mambo by telling about important and less important happenings.

The process
Like always, the start is the most difficult part of a research, and in the beginning I was worried about how to start. In the first two weeks, I conducted interviews with only two villagers. These two were staff members of MamboViewPoint, so I could not be satisfied. However, I also put a lot of effort in the beginning by just talking with people, participating in development projects or social activities. It turned out that by doing this, I built the foundation for a large numbers of interviews in a later phase of the research.
In the beginning I was struggling with finding translators. The guides of MamboViewPoint were did a good job, but they were very busy with trips for tourists which made it difficult to make appointments with people. I was very lucky that I met Hoza, who became my research assistant. I already knew him, because he was participating in a tree nursery project. It turned out that his level of English was satisfying to me, and he had good ideas on how he could help me. After his first time translating for me, I was convinced that he was the right person who was going to help me making this research a success. Thanks to him, I adjusted my goal of 25 interviews towards 30 interviews, which became in the end 33 interviews!
During my talks with the people in Mambo village and surroundings, I realized that people really enjoyed my visit. Most people experienced the interviews not only as being a passive research subject, but also as sharing knowledge in two directions. Just visiting people at their home and listen to what they think made people very happy, which get symbolized by the disappointed reactions by some people if I did not interviewed them yet. Additionally, of all the people whom I have interviewed, there was only one person who was not willing to be interviewed.
The interviews and participating in meetings and social activities resulted that it was for me not possible anymore to walk in the village without meeting people. While I left for walking to the village, I heard my nickname ‘Maliki’ called by many people shouted. In the beginning of my stay I was always 10 minutes too early for an appointment, while at the end I was always 5 minutes too late for an appointment. This was because I had to greet so many people on my way. 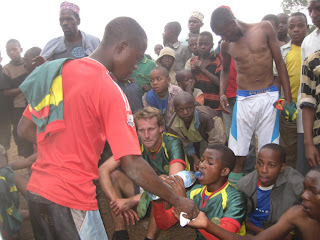 The importance of anthropology is that the researcher is his own research tool. This means that I had to come closer to my research subjects by talking and participating in their lives. This will open doors to achieve more results by making use of my senses. I feel like I really achieved this in more ways. People opened themselves a lot to me. First of all, the people in this area are very open and friendly by themselves, and show a lot of hospitality. However, I think I increased their openness by really showing interest towards their lives. I talked with them, stopped for a greeting while walking in the village, hang out with the people in the village center, and participated a few times in voluntary village works. Also my Kiswahili at the end of my stay really improved. Whereas I could only say ‘Hello, how are you?’ at the beginning, at the end I could introduce myself and present the aim of my interview fully by myself. This was partly because I have spent many hours sitting with the MamboViewPoint staff and just talking in Kiswahili.

I already knew it a bit, but after this research I discovered I am studying the best study there is: doing research by communicating with as much as possible with people. Fortunately, the people I researched in this case also turned out to be amazing friendly people. This also resulted to me that I felt very sad in the days before my departure. Despite of this, because I was almost leaving, I knew I had to enjoy every moment of being here even more.
But with the coming of the end of this research, it is also time to analyze my findings of this research: 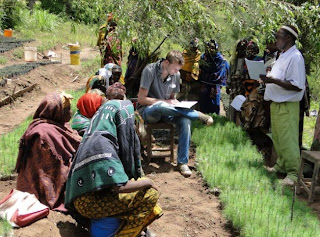 First of all, anthropologists always have the tendency to argue the good things bad, and the bad things good. However, Herman and Marion made it very difficult for me to criticize their projects they are implementing. The reactions of the people in the village made me realize how much the people appreciate MamboViewPoint. During my conversations, it turned out that many people saw MamboViewPoint as a new alternative to bring more development in this area. This is because the ones who are supposed to facilitate development, the local leaders, are experienced as being not reliable. The people in the village experience MamboViewPoint as much more reliable in facilitating development, so people depend more on them. However, this could be a disadvantage, because in the end it are the people themselves who should develop the area. Still, people are very happy with certain developments on which they had to wait for many years, but are brought by MamboViewPoint very fast.
Another very important thing I found out during my stay here is that the willingness of people to participate in development project is very high. However, they put some restrictions on their participation: As long as the project is transparent and the facilitators can show what the benefits are, the people in Mambo are very willing to contribute their efforts to a development project.
These are some of the main findings during my stay here. But at the moment I arrive back in The Netherlands, I have to analyze all my collected data and start writing my thesis. This means that I am going to spend my time for three months in the university library. While analyzing and writing, I will constantly think back of this great time here: In this period, I noticed how much I love this country and its people, and how much I want to come back to the place where I had one of the best periods of my life!

For Dutch blogs written during my time in Mambo, visit http://markintanzania.waarbenjij.nu or http://vamosbien.nl/?page_id=398
Posted by MamboViewPoint at 7:37 AM 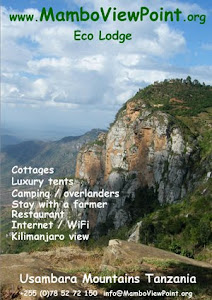